At a first glance things don’t look hopeful. The media image of trans people is of someone magically transforming from a man into a woman with the aid of sophisticated modern medicine. Terms like Transgender, Non-Binary, and Gender Identity didn’t exist in the past, so how could anyone have “identified” as such?

The idea that trans people are characterised by full transition from one binary gender to the other has, for many decades, been pushed by the medical establishment. However, in recent years treatment protocols have become much more relaxed and patient-centred, allowing for a greater variety of identities.

It may seem that non-binary trans identities are something very new. However, a cursory glance at history will find the artist Claude Cahun openly rejecting both binary gender categories in the early 20th century. Looking beyond the history of Western cultures, the world is full of people who place themselves outside of the gender binary. Throughout South Asia, Polynesia, and various Native American cultures we find social structures allowing people to cross gender boundaries. These traditions appear to date back hundreds, if not thousands, of years.

A recent BBC radio programme, “Inside Transgender Pakistan”, highlighted the debate in Pakistan between those who embrace the Western model of full binary gender transition, and those who adhere to the traditional hijra culture, whose members see themselves more as a third gender. What we can learn from this is how trans people come to understand themselves, and their place in society, is highly culturally contextual.

The “Caitlyn Jenner model” dictates one particular way of being trans. The existence of non-binary people shows that not all Western trans people fit this mould. (See, for example, Trans Like Me by C.N. Lester). In other cultures, a third gender model may be more acceptable, but that doesn’t preclude some individuals having a more binary-gendered understanding of themselves.

Foucault had a point when he claimed, in his History of Sexuality, that the idea of the homosexual, and its cognate, the heterosexual, are late 19th-century inventions (terms coined by Karl-Maria Kertbeny). People from the past did not talk about their “sexual orientation”. This did not preclude them from indulging in same-sex relationships.

Did people from the past who transgressed gender boundaries see themselves as having a gender other than what they were assigned at birth, even though the word “transgender” hadn’t been coined? Without testimony we can’t be certain, but we can see what others say about them. The 1st century Jewish scholar, Philo of Alexandria, talked about:

“Those of them who […] have desired to be completely changed into women and gone on to mutilate their genital organs” (On the Special Laws 3:42).

Philo is talking about the Galli: the devotees of the goddess Cybele, who underwent ritual castration and lived the rest of their lives as women. Apuleius portrays a group of Galli as what sounds to us like highly camp, sex-mad drag queens (The Golden Ass 8:26-30). Then again, Apuleius was a satirist, and any trans woman will instantly recognise his characterisation from modern TV comedy shows.

The Galli don’t get to speak for themselves. Almost all we know about them was written by well-to-do Roman men. That Patricians should look down upon the Galli is not surprising. Exactly the same happens to trans women today.

Women historians can be more open to understanding. Lynn Roller, an expert on the Cybele cult, has likened the behaviour of the Galli to modern-day hijra, and Gwendolyn Leick has speculated that similar cults may have existed in ancient Mesopotamia.

The argument that modern medicine is a defining characteristic of trans identities is often used to claim that modern trans people are an entirely separate category from anyone in the past who may have transgressed gender boundaries. Past cultures had no knowledge of plastic surgery, and could not synthesise hormones. This does not mean that medical intervention did not take place.

Roman medicine understood several different methods of castration. It seems likely that only a minority of the Galli had their penis removed. However, the removal of the testicles would have acted as surgery and a primitive form of hormone therapy as it deprives the body of testosterone. The creation of human eunuchs dates back at least to the Assyrian empire and possibly much earlier.

How, then, are we to identify and understand trans identities from the past? It is important that we should not fixate on modern Western concepts of what being trans is about (especially if those concepts are fast becoming outmoded). What we can do is focus on behaviour.

Historians who are not trans may not fully appreciate the level of risk and commitment involved in gender transition, particularly when there is no legal protection, and no religious cult you can join for support. It is not easy to live full-time in a gender different from that you were assigned at birth.

During the American Civil War, many people assigned female at birth fought in the armies of both sides, presenting as men. Their reasons were many and various; including wanting to be with loved ones, and being desperate for a paid job. They undertook massive risk beyond that of simply being a soldier. Only a small number, such as Albert Cashier, continued to live as men after the war. That difference in behaviour, while not proof of identity, is highly significant.

It is important to be open about motive. If we assume that all gender transgression is a “deception”, or that cross-gender behaviour can only be evidence of sexual preference rather than gender identity, we are erasing the possibility of trans people in the past. Where the cross-gender behaviour is consistent, we have to have an explanation as to why the subject is taking so much extra risk.

We can also look at the social structures in ancient (and modern non-Western) cultures that make space for people to transgress the gender binary. That we find these identities in so many different cultures is surely evidence that being trans is a fundamental part of human nature, and what we have is a long history of society’s attempts to come to terms with that.

Cheryl Morgan is a writer, publisher and broadcaster. She is co-chair of OutStories Bristol, an LGBT* local history organisation. She has delivered papers on many aspects of trans history and trans characters in literature, and is a regular speaker at LGBT* History Month events. You can find Cheryl on Twitter @CherylMorgan. 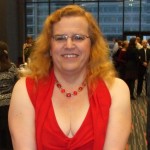