If Michel Foucault is to be believed, ‘homosexuality’ was invented in the nineteenth century as a discourse of power structures. This is not to say that same-sex sexual activity has not been around as long as any other practices – that would be an impossible assertion! – but rather that people would not have categorised themselves and others on account of gender-based attraction. Words like ‘homosexual’ as well as ‘bisexual’, ‘asexual’ and others in the ever expanding alphabet soup of LGBTQ+, are not applicable to the ancient Mediterranean, so the argument goes, because they are anachronistic.

Yet, by disallowing ourselves our own contemporary terminology, there is a risk of throwing the baby out with the bathwater. Yes, to an extent this position highlights the differences in societies past and present, but in doing so we reassert the ‘Otherness’, and the ‘non-normativity’ of these identities. We must restrict our language surrounding the (potential) same sex desire evoked in Sappho’s poetry, unable to call her a Lesbian in any sense except her citizenship of the island of Lesbos. On the other hand, we feel no need to dance around, or call into question the normativity of Julius Caesar’s many marriages and extramarital (hetero)sexual pastimes. This reasserts heterosexual activity – if not the identity – as the ‘norm’, the universal, the unquestioned, whilst even the naming of any other ‘deviances’ is criticised as ahistorical.

The point becomes much more explicit when we turn the focus on gender. It is generally agreed that gender – and gender roles – are a social construct that fluctuate across different societies, and that the conditions for ancient masculinity, for example, differed strongly from the modern. Yet, the gap between the apparently ‘normative’ and ‘non-normative’ genders, and how we treat them, remains vast.

Queer gender identities and roles in contemporary society are frequently dismissed and derided as ‘modern inventions’; similarly, academic focus on pre-modern queer genders has followed the path set by queer sexualities, with ‘trans history’ tied to Western modernity. Thus, we may marvel, scrutinise and unpack the second century CE satirist Lucian’s authorial intentions, but must ultimately again couch our terminology, in his Dialogue of the Courtesans, where (the fictional) Leaina recounts meeting Megillos, who repeatedly asks for male pronouns and references, claiming that ‘I was born a woman like the rest of you, but I have the mind and the desires and everything else of a man’ (5.4).

We can question here what Megillos means by being a man, where he locates his masculinity and ultimately, we are given the opportunity to deny him that identity, as Leaina ultimately does. I doubt, however, that anyone would ever ask if Lucian was a ‘man’. No one questions the author’s masculinity, where he locates himself and whether we as his readers are allowed to deny him that. Once again, the contemporarily understood norms are the universal, whilst the rest must submit to the same debates over existence and invention of identity.

At a recent conference, I gave a paper on an ancient identity that is neither man nor woman, and thus is quite simply non-binary. During the question and answer, a delegate asked me if I considered what I am doing as ‘political mythmaking’. My answer, then as well as now, is yes: all history is by default political, and our discipline constructs as much as reveals (versions of) the past. Furthermore, the stories we choose to tell – and how we choose to tell them – be they of ‘normative’ identities or otherwise, will always be a form of mythmaking. Translation, linguistic but also cultural, is and can only be interpretation. So, I choose to interpret a history in which I see myself, and other ‘non-normative’ identities and feelings, represented too.

Chris Mowat is a Teaching Associate in Ancient History at the University of Sheffield. Their research interests focus on religion and gender, particularly queer gender identities, and the intersection between these two areas in the Roman Republic. They are also an editor for the blog NOTCHES – (re)marks on the history of sexuality. They tweet at @chrismologos.

Image Description by curators: The cup is said to have been found in Palestine with coins of the Emperor Claudius (41 – 54 AD). The age and status of the figures in both scenes is carefully shown. The bearded man and youths are shown in a style typical of the classicizing art of the reign of the emperor Augustus (30BC – AD14), and can probably be dated more closely to approximately 15BC-AD15. The musical instruments, wreaths and mantles suggest a cultured, Hellenized setting. Both partners in the reverse scene have long locks of hair, the youth’s bound up, the boy’s loose. Such locks were worn by Greek boys, and were offered to the gods in a rite celebrated at puberty. 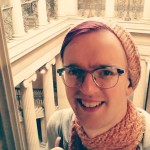