This is the fourth in History Matters’ series of blogs for LGBT History Month. All of the blogs will appear here as they are posted.

In his 1932 book The Cloven Hoof the British writer Taylor Croft set out a common ‘line of defence’ offered by ‘homosexual’ men: ‘homosexuality and creative or other high human abilities are almost inseparable.’ Croft thought this was a ‘gross exaggeration’ but had much sympathy for the idea. ‘There are many historical precedents for it,’ he argued, ‘and homosexual practices have been attributed … to such varied men as Julius Cesar, Walt Whitman, Alexander the Great, Michaelangelo, Catullus, Shakespeare, Xerxes, Goethe, Sophocles, Gray, Napoleon, Wilde, Marlowe, Propertius, Heine, Garrick, Horace, Verlaine, Cosimo de Medici, Petronius and Lucian.’

Croft was not the only person to make this kind of argument. Since the 1860s, at the latest, demands for citizenship rights and social acceptance for queer men and women have been bound up with the process of defining the respectable homosexual by writing their history. Just as sexologists like Havelock Ellis presented sexual desire as natural and fixed, so examples of same-sex relations in past societies allowed them to argue that homosexuality was timeless — neither to be stigmatized nor suppressed.

We can also think of them as family histories. The historian Laura Doan has recently characterized LGBT history as a version of genealogy. Like so many others, Croft was looking for ancestors. He found them in poets like Wilde and Whitman and military heroes like Alexander. Today we are more interested in the lives of ordinary queer men and women, but the desire to see ourselves in the past remains the same. Just as family history is vibrant and impassioned, so is LGBT History Month. As well as the title of a popular BBC television series, ‘Who do you think you are?’ is the question that animates popular histories of the LGBT past in contemporary Britain.

Family histories are often driven by fantasy and projection, however: they say as much about the desires and anxieties of those who trawl the pages of Ancestry.com as they do about the forebears they discover there. LGBT History Month is similar in many ways. Like so many family histories it glosses over the petty and not-so-petty squabbles and power struggles that divide its members. Powerful differences of class, gender, race and ethnicity, age, and place make it hard to talk of a homogeneous LGBT community in the present. Most importantly, I think, it collapses the differences between then and now. In seeking equivalence between Wilde, Napoleon, and Petronius, Croft created the illusion of sameness across the centuries.

If there is one thing that historians of sexuality might agree, it is simply that sexual desires and identities have a history: they are time and place specific and change (in radical and often surprising ways) over time. The men Croft looked to as ancestors would not have recognized the vibrant queer world he moved through in 1930s London. If we found ourselves in one of his haunts — the basement bar at the Criterion Theatre, in Piccadilly Circus, for example, we would be struck by the strangeness of the men who met there as much as their similarity.

There are real pleasures in claiming such men as part of an LGBT family; the politics of LGBT History Month remains important today. In looking for ancestors, however, genealogy means we lose sight of the very different ways in which those who came before understood and lived their lives. The past is queer.

Matt Houlbrook is Senior Lecturer in Modern British History at the University of Birmingham, specialising in gender, sexuality and selfhood. He is the author of Queer London: Perils and Pleasures in the Sexual Metropolis, 1918-57 (2005). You can find Matt on twitter @tricksterprince and read more of his work at his own blog here.

Image: Busts of Hadrian and Antinous at the British Museum (2013) [Wikicommons] 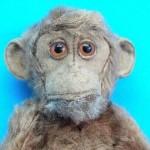