In 1903, this postcard was delivered to the engineer’s office in Paddington railway station, sent by a former colleague from Cape Town. The engineers stuck it into their office scrapbook, nicknamed Enginorum, which currently lives in the archives of the National Railway Museum (NRM), where I discovered it whilst on placement planning a fictitious exhibition.

As a student interested in women’s experiences of imperialism, I have long believed that museums should be doing more to engage with the British Empire and I was drawn to the picture immediately. It completely encapsulates the way imperialists interacted with and viewed colonised women.

In writing “The prospective Wives of” the engineers, the sender eroticises these women and assumes their ownership. As this was a prevalent attitude across the Empire, I desperately wanted to include the image in my exhibition.

Given the critiques that museums are ‘hiding’ the imperial past, I was pleasantly surprised to find that all NRM staff I spoke to actively encouraged me to include it in my exhibition. Like me, they all seemed to believe that museums should be more engaged with the British Empire.

Why then had they failed to do so?

In my exhibition planning I was to discover a few possible reasons why. Coming across questions – practical, intellectual, and ethical – that my academic work had rarely forced upon me, issues that left me constantly switching between including the postcard and discarding it.

When presenting my exhibition plan, a colleague asked me ‘What would you do if your funding was halved?’. The main floor of the NRM is open plan, which means it can become quite loud and chaotic when the museum is busy. I decided to build cladded walls around my exhibition so that I could provide a closed-off, quiet space in the museum.

This, I hoped, would give visitors a private area to seriously reflect upon the history of the British Empire. The cladding would likely have been the most expensive part of the exhibit. Meaning that I would have had to remove it if funding was cut. Given its intended function, to provide a quiet space for reflection, this would likely have led me to forgo the display of imperial objects.

This conflict between what staff thought should be displayed and what funding would allow played out repeatedly. I frequently heard of wonderful objects, both imperial and non-imperial, which had truly amazing stories but could not be displayed as they did not fulfil the objectives of a grant.

An advisor to the former British Empire and Commonwealth Museum once said that ‘nobody wins plaudits for funding exhibitions on empire’. Perhaps, then, the charges made against museum staff of ‘hiding’ the imperial past are over-simplistic, unfair even, and should also be directed at funding bodies.

Visitor reactions to the postcard also concerned me. Not because I was afraid of criticism for discussing the Empire. I would have openly embraced the debate. Instead, I was worried about how people would look at the bodies of the women depicted.

In a museum visited primarily by school children, I was fearful that the naked breasts would turn my exhibition into a joke. This would recreate the power imbalance in the original image by reducing the women and their bodies to the source of amusement for a second time.

Initially, I thought that I could use this to my advantage. I could teach the public about how the very act of looking is inherently marred by our own prejudices. However, object labels, I was advised, are best kept to around fifty words to retain a visitor’s attention. A word count which includes the object’s name, reference number, and date. There was no way I could have discussed such a complex issue in such a short space.

Also, the women of the image look uncomfortable and their stances appear forced. To me, it looks like they were coerced into being photographed, so had little power in the production of the image. Was I further stripping them of agency by exhibiting them for a second time?

Plus, in thinking that I had a right to decide whether to display their bodies, wasn’t I just assuming the same level of ownership over them as its original sender? This was an ethical dilemma that resurfaced when deciding whether I should even include the image here.

I still passionately believe that museums should be doing more to discuss the British Empire. But museums are complex institutions facing countless financial, political and moral pressures. It is this multifaceted nature that I believe is largely responsible for their imperial silence.

Not once at the NRM did I feel discouraged from talking about Empire, nor did I witness any deliberate attempt to hide the past.  Instead, I found like-minded people frustratingly trapped between the history they wanted to tell and the history they could tell.

Hannah Silvester is a MA student at the University of Sheffield. Her interests lie in gender history in late colonial and postcolonial South Asia. Hannah’s current work focuses on using Muslim women’s literature as a historical archive of nationalist and feminist thought in the years prior to and immediately after the partition of 1947. 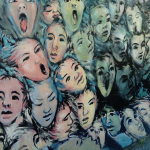