As a member of Sheffield’s Student Services, each year I help out at the degree ceremonies.  In the robing room one day last January I checked my mobile and picked up a voicemail from a TV production company. They’d used my latest book as the main source for a forthcoming programme on the industrial heritage of the North, with Robson Green. Would I be prepared to act as consultant? Of course!

So, how does a non-academic end up getting a gig like this? Well, it was at the age of ten, following a visit to the British Museum to see the Treasures of Tutankhamun exhibition that I decided I was going to be an archaeologist. But after underachieving at school I drifted into university thinking it would be best to do “something vocational”. A year later I dropped out; 1 I was never going to make it as a Management Scientist.

I should have realised that I would never make it as a bank clerk either, but I needed a job to keep me from ending up “on the scrapheap of Thatcher’s Britain” as we used to joke even then. That lasted three years, during which my interest in the past resurfaced. At lunchtimes I would go to Birmingham Central Library and became an avid reader of a new magazine called “Popular Archaeology”, a publication that anticipated Time Team in print. The fire had been rekindled and at the age of 22 I entered Birmingham University to read history, taking a number of optional modules in archaeology.

I knew almost from the start that I wanted to take it all the way to PhD, the same way that writers say they write because they “have to”. And from early on I knew my specialism would be in medieval ecclesiastical history. I also knew that I wanted to be an academic, and so it was that I arrived in Sheffield in September 1990 to take up a temporary post as research assistant to Ian Kershaw. 2. And temporary became the order of the day: a one-year contract extension here, some casual teaching there, followed by a three-year post as Lecturer in Medieval and Local History at the University of Hull. By the turn of the millennium – that most momentous of dates – the job applications had been getting nowhere for some time and I was getting by with a part-time job in a local outdoor shop and occasional research work for Sheffield’s commercial archaeological unit, ARCUS.

Then a phone call came from out of the blue. A friend of mine from university was working in TV production and needed someone to do archival research for a programme on the Great Plague. The piece went on to win the award for Best History Programme from the Royal Television Society and on the back of it I got further work making history drama-docs, as researcher, script-writer and even actor!

Tim Cooper as surgeon William Basnett in The Peterloo Massacre (Channel 4, 2003)
[We seem to be having some glitches with embedded videos. In case of difficulties you can find the original here.]

But all things must pass, especially in TV, and in 2005 – following a stint as a postman – I was back at ARCUS, working on an English Heritage funded book on the history and archaeology of the Trent Valley gravel industry. Two years later, at a party, a mutual friend introduced me to the commissioner of a popular series on the interpretation of the physical past and the book that resulted has now inspired a two-part TV series for which I acted as consultant. In the meantime, the demise of ARCUS meant that I was looking for work again and that’s how I now find myself employed by the University’s Student Services. So in the end I think this is a blog for people contemplating a PhD in History. Do it, as you know you have to, and see where it takes you. Whatever you do, it will be your common thread. Because History matters.

Tim Cooper taught History and Landscape Archaeology at the University of Sheffield from 1990 to 1995. He joined the University’s Visitor Information Service in 2008 and after three years working at the Student Services Information Desk, is now an International Student Support Officer at the University. He writes an occasional blog about his rediscovery of his first love of Ancient Egypt and you can find him on twitter @thegreatbelzoni. The second part of Robson Green: How the North was Built airs on ITV on Tuesday 16th July. It is based on Tim’s book How to Read Industrial Britain (2011). 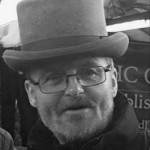